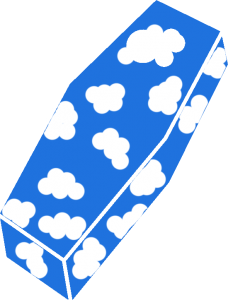 When I die, I want to be buried in a cardboard coffin. I want it to be painted cerulean blue (to reflect the Australian sky), with white clouds on top of that.

At my funeral service, I want people to be given Sharpies in bright colours so that they can write notes to me on the clouds on my coffin. I hope that I die before my children so that they can see what people write to me in their farewells.

I don’t know how I want to die. There is something to be said for it happening quickly so that you don’t have time to think about it, or know that it’s happening. But there’s also something to be said for having time to get your affairs in order, to reach out to those that you’ve been meaning to reach out to for far too long, to say your goodbyes and thank yous. (Yes, that’s ‘yous’ not ‘youse’!) I don’t think I’ll try to put an order in – I’ll just accept what comes. Not that I’ll have any choice.

I want my funeral service to be relaxed. I’m not religious, so I don’t want it in a chapel or a church – it needs to reflect me. I don’t like going out much, so perhaps it should be at home – with me in the corner, like a wake. I think that’s the Irish coming out in me. Maybe the family could put on a few drinks and munchies and set aside an afternoon for people to wander in and out and say their goodbyes, share their memories and pass on their condolences. That would be a good time for them to write on my coffin, too, me thinks. Pity I won’t be around to see what they write! Or maybe it won’t be … 🙂

I don’t want to be cremated. Don’t ask me why – I think it’s the permanency of the thing. Or perhaps my ‘fear of the worst’ personality. I mean, what if someone needed to get a DNA sample or something six months after I’ve gone? What if a question raised its head and I needed to be exhumed? If I’ve been cremated, then those things will have to go unanswered! So cremation isn’t something I want.

But where to be buried is a hard one for me. I don’t really feel like I belong anywhere in particular, and I’m not a big fan of most of the cemeteries I know. If I’m buried locally and my family moves away from the area, then they’ve had to ‘leave’ me. Having my parents’ ashes in the cupboard has been quite soothing for me over the years. Hhhhmmmm … looks like it probably will be cremation, after all.

Am I afraid of death? No, not really. I’m afraid of running out of life, but I’m not afraid of death. I don’t believe in Hell, so am not scared about ‘the other side’ – whatever is or isn’t there. I’m only scared of leaving too much unfinished business or leaving a mess for others to sort out. (Note to self: start de-cluttering – faster!)

Where to die is an interesting question. I don’t want to die in a hospital, and would prefer not to die in any type of facility if it can be helped. I would like to die at home, surrounded by my loved ones. That would, of course, involve some level of predictability, or the trauma of them witnessing my unexpected death when they just happen to be visiting. That would be ghastly! But if I can die at home, then that would be nice. I kinda like it here.

And what to be buried/cremated in? If I die predictably, after a period of ill health, I will possibly lose a lot of weight. In that case I might be able to fit back into my wedding dress. (Here I am with my Dad who was really difficult when it came to talking about death – until he was actually nearing the end.) 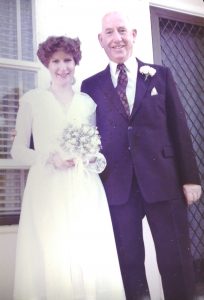 But if not, I’ll still fit into the beloved onesie my beloved Mum made me back the 1980s. Not that the onesie was beloved by anyone else in the family! But I liked it – it was original and made with love.

Hmm … the wedding dress or the onesie? What a sartorial dilemma!!

And what spurred all this thought? An article in a recent SMH Good Weekend titled Last rites: how the Western world has lost its ‘death literacy’. In the article, journalist Jackie Dent interviews three people who work in the field: Victoria Spence, Dr Peter Banki and Kerrie Noonan.

Having known Kerrie Noonan from The Groundswell Project for some time, I know what good work they’re doing trying to encourage you to talk about death and express what you want when you die. These conversations need to happen while you’re alive. When you’re gone, it’s too late! Stating the bleeding obvious, I know.

So I’m talking about it. Here. Now. Even though I don’t plan on having it happen to me for a long, long time. But we all know what they say about the best laid plans of mice and men, don’t we?

What do you want when you die? Have you thought about it? Discussed it with those that will be taking care of matters? Personally, I think it’s the kindest thing to do. In your family’s time of grief, the last thing they need is to be second-guessing or arguing among themselves about what you would have wanted when you shuffled off the mortal coil.

Plus, why not? We plan a whole range of other life celebrations as we go along: christenings and naming ceremonies, bat mitzvahs and bar mitzvahs, debuts, 18ths and 21sts, engagement parties, weddings, anniversary celebrations, birthday parties and ‘why the hell not?’ parties. So why not plan our own funerals?

Go on, I dare you. Get the conversation started today.

In the meantime, enjoy a little walk down memory lane: