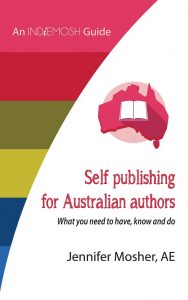 I have finally found out what it is like to be edited, and I learned quite a lot. For the past decade I have been editing and proofreading other people’s works and now I know what it feels like when the tables are turned.

Last week I released Self publishing for Australian authors: What you need to have, know and do, and as part of that process (much earlier in the year) I sent the manuscript out to five beta readers for their feedback. One of these was my daughter, Ally, a graphic and web designer who co-runs IndieMosh with me, so her views were vital to make sure that I made sense when discussing our business practices. The other four beta readers were editors from a variety of backgrounds: Adam Finlay, Denise Sutherland, Paul Vander Loos and Sarah McCloghry. My brief was open: I just wanted them to beta read the book and let me know what they felt it needed, at whatever level suited them, as I understood that they each had their own commitments and were doing me a favour.

What resulted from the exercise was very interesting:

Some of the feedback was laugh-out-loud hilarious and I do think that, as editors, if we have a reasonably comfortable relationship with a client, it’s good to lighten our feedback with a bit of relevant humour here and there.

What pleased me most is that no one made me cry! All the feedback was helpful – whether I accepted it or not – and gave me the ability to think seriously about what was important to me as the author of the book.

It was a terrifying thought putting the book out there for five of my industry peers to comb over, but it was worth the exercise, not just for the book or for me as an author, but for me as an editor. I now know what it’s like to open that document with Track Changes showing and think, ‘Ermagherd, how did I write that?!’ or ‘How did I miss that?!’ or ‘What the hell was I thinking?!’ or ‘What do they mean by that?!’ But I am grateful to every one of them for dissecting my manuscript the way they did as every little mark, every little comment, gave me the chance to polish it in such a way that it’s still mine, but so much better now than when I sent it to them. There will be people who read it still and think, ‘Hhhmm … that could do with some work’, but I had to keep reminding myself that no matter how much time was spent on it, there will always be people who won’t love it.

When you publish a book, you’re baring your soul, your talent, your creativity and knowledge to the world in general. And no matter how many beta readers or editors you have, they’re not all going to see what changes should be made, and they’re not all going to agree on what changes should be made. There will be much common ground, but also room for many differing thoughts. And you don’t have to agree with all of their suggestions either, which is the beauty of self publishing – your book, your way.

But I have to say, my book is a much better product for having been seen by others first. And for that I thank them.