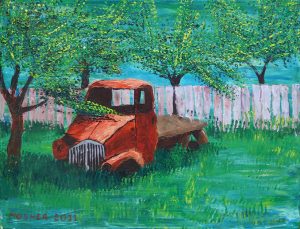 In April this year, following generous encouragement from Pem Weeatunga, I entered the 2016 Elizabeth Jolley Short Story Prize. Needless to say, it didn’t even make the short list, but I really enjoyed the writing exercise and figured I may as well share it here.

If you know me, you’ll know that my version of the apocalypse isn’t about disease or nuclear war. My theory is that it will occur when the internet is brought down. I have always wanted to write a story backdropped by that scenario, but until this year hadn’t been able to come up with a storyline. In March, my husband had to undergo day surgery and so I took my laptop and sat in the waiting room belting out as much as I could based on a slim idea which had come to me a few days earlier about how everything changes, yet everything stays the same. I focused on creating content, not fussing about where the story was going, just letting it happen, and it was one of the most exhilarating writing experiences I’ve ever had! I then tidied it up and submitted it.

The word limit for the Elizabeth Jolley Prize is 5,000, which is a lot for a blog post, so I figured I’d serialise it over a week, using its seven discrete components for a daily release. i have since published it in its entirety, so if you like what you read here, click through at the bottom to read the rest of the story on one page.

And please note that this story comes with a language warning.

Life was good. And then the internet crashed.

I’m still not sure what happened, what the truth of the matter was. Some said it was ISIS hitting the Pacific and North Atlantic cables at the same time. It doesn’t sound enough to me – I mean, there were satellites up there, too, so I think there has to be more to the story than that. But without the internet, we’ll probably never know for sure. Isn’t that ironic?

I was one of the lucky ones. When Gerald had died, a couple of years beforehand, his super had been enough to pay off the house and leave some over. And he’d been neurotic enough to always keep a tin of notes locked away in the garage, from way before he even retired, so when the cash in circulation dried up and people began to starve, I was able to ride it out until the banks managed to get back into a form of paper-based service. I should never have laughed at his ‘money under the mattress’ obsession!

Anyway, it was a long time ago now and bit by bit communities carved themselves out a new normal. Where we used to have a shopping centre, people now gather in an ad hoc market each day to barter or sell what little produce they can grow, what livestock they can nurture, or whatever they can create with their bare hands to bring in a few dollars to spend on food. It’s funny how all those youngsters born after about 1990 grew into adults that bought their meals. Then they had to learn to cook, and have now developed cooking skills. Of a sort.

At first, the banks were foreclosing on people who couldn’t pay their mortgages, forcing innocents out of their homes. Luckily the oil dried up first, and so there were abandoned cars and trucks everywhere providing temporary shelter. Well, they started as temporary shelter …

Many people moved towards the cities. Why, I don’t know. Perhaps they felt that services would be restored more quickly in the cities. But it didn’t work like that – it was just more people in the concrete jungle living further away from the farmlands and fresh food. With no long distance transport and logistics a thing of the past, starvation became a thing of the now. And so the city folk began to drift inland, towards the rivers and pastures – anywhere they could find a hope of working in exchange for food.

It was like those terrible scenes we saw on television (remember TV?) back in 2015 when Syria basically vomited its populace across Europe – millions of hollow-eyed people walking in desperate hope. But in our country they were moving backwards – to where there were less people, not more, in the hope of getting food and a future.

They didn’t all keep walking. The empty houses, the ones the banks had taken away from their owners, had stood, wasting, first for months, then years. The banks couldn’t sell them – no one could afford to buy them – and so they stood empty. It wasn’t long before the drifters began to squat in the ‘shell houses’. Of course, there was no power, water or working sewerage in these homes, but they were better than living in cars and trucks. Naturally, fights broke out among many of the drifters over who had rights to what, and many houses burned down as a result of accidents with candles and fireplaces, and sometimes as a result of arson when one group decided to take revenge on another.

But despite everything, there didn’t seem to be enough shell houses to go around. And a lot of drifters were single people. I still can’t believe how many people lived alone in the city. Of course, once all the services broke down it was hard for people to make contact with loved ones and friends in other places, so a lot of people weren’t so much ‘single’ as ‘isolated’. But I still found it shocking the number of solo people drifting up the hill from the city, trying to make it across the mountains to the plains.

In the early days, we made sure to lock all the windows and doors every night. It had been habit from prior to the crash, but without Gerald, I was concerned for myself and the kids – my grandchildren, Zayn and Ava. How long before strangers realised we were living, just three of us, a ‘mature age’ woman and two young teens, in relative comfort and space? I needed to keep a low profile and only allow in those who knew us, who we felt safe with.

Then one day, a couple of years after the start of the decline, Ava brought a young girl home from the market. She was only fifteen and had clearly been beaten and treated badly. We made her up a bed, shared our food and helped her bathe, Ava providing her with ‘new’ clothes (if you can call two year old clothes ‘new’) while we washed and dried her others, and over the ensuing days she began to trust us a little. Not only had she been beaten, she’d been pimped out by an older man who’d put out his hand to help her get to the plains. I couldn’t believe anyone could be so cruel – to pretend to offer hope and then turn on a poor, isolated little girl like that. Just goes to show that no matter the circumstances, there’s always a dickhead around the corner waiting to take advantage …

Kaylin was just the first. It was only a matter of weeks before Ava brought young Brady home – a twelve year old who’d been orphaned after his parents died when the shell house they were living in had been firebombed. And a week after that Zayn brought home Nicholas, a young man who had been a stockbroker and seemed to be suffering some weird sort of PTSD.

And so our comfortable home for three suddenly turned into a rather cramped household of six. I still locked the doors and windows at night but awoke in the wee small hours, a week or so after Nicholas moved in, to the worrying sound of the latch on the back door being turned.

I was lucky it was a full moon – I was able to slip quietly through the house without lighting a candle. When I reached the kitchen, there was Nicholas letting someone in the back door.

Startled, he turned, looked back at the man at the backdoor, then back at my feet. ‘I’m sorry, Madeleine, this is my brother, Ryan,’ he mumbled. ‘We found each other at the market this morning – I thought he was dead. I should have asked but I was frightened you’d say no.’

‘So you just invite him into my home instead?’ I whispered, trying not to sound too harsh. ‘How am I supposed to feed yet another mouth? Where is he supposed to sleep? Life is hard enough as it is without having yet another person stretching our resources. Why should my grandchildren suffer even more?’

‘But what will happen to him if he can’t live here with us?’

‘Don’t do this to me, Nick. You know I’m a good person, but I have to have limits. We’re barely getting enough to eat between us as it is – how can I feed another person? And where will he sleep? I’m exhausted! I’m doing my best to take care of you all, but there’s only so much I can do. Remember travelling on planes? Remember that safety message about putting your own oxygen mask on first before you help others? This is the same thing – if I don’t have food, ownership of my own house, some control over who moves in and what happens here, we all go down together and that’s not fair on those that were here first.’ And then I heard it, the cough, coming from behind Ryan. ‘Who else is there, Nick?’

I didn’t know what to do. How could I turn them away? But how could I let them in? If they came in, I knew they’d not leave – at least not for a long time. It wasn’t fair. I didn’t mind sharing some of my good fortune, but to make everyone else suffer more and more by allowing more and more drifters in … there had to be a limit. Yes I was lucky, but it wasn’t like I wasn’t helping others – I was – but how many people should I be expected to help? And at what cost? What if Gretchen’s cough wasn’t just the flu? Should I put everyone else in the house at risk of something more sinister just to help the one?