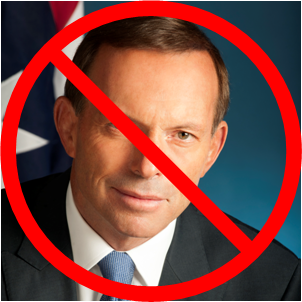 Cards on the table – I’m a swinging voter. Every time we go to the polls, whether it’s local, state or federal, I make a decision about who I’m going to vote for. Every time. I count myself lucky to live in a country where we are obliged to vote – don’t do it and you get fined – which means that our election costs are kept down as it’s more about the policies and less about the hoop-la and the ‘sell’ – the money spent trying to get people to the polls. So I do appreciate our electoral/voting system.

But this time around, I almost wish I didn’t have to make a decision. Sometimes, when I feel like I’m having to choose between the devil and the deep blue sea, it’s very tempting to just waste my vote. I think I may have done it once, many years ago, and the guilt got me, so I’m unlikely to ever do it again, but gee, give me something worth voting on, people!

I mean seriously – the Labor Party have been a joke this last three years with their factional in-fighting and the way they eat their own, so why on earth would I trust them with running my country?

And the Liberal Party? Well, if they’d delivered any actual policies that were backed up by any realistic costings in time for the electorate to actually consider them, they might have had a hope. But they’ve held off, and held off, and so I don’t feel they have a clue, so on that basis again, why on earth would I trust them with running my country?

The way things are going at the moment, I will be voting along very personal, micro-topic lines. The big picture is too messy, and too fraught with ‘lies, damned lies, and statistics’. As a voter, I really don’t have the time and energy to decide what’s truth and what’s twisted fact.

But there’s one thing I am satisfied about, and that’s the fact that we need the Labor Party’s proposed NBN. The Coalition’s model will just not cut it.

By ‘rest of the world’ standards, we have a very small population. We exist in the middle of a vast ocean many, many trading kilometres away from our nearest partners. We have spent decades destroying this vast brown land grazing animals which should never have been introduced to it and raping the countryside to extract minerals and resources to sell and ship to our distant trading partners. We have spent years subsiding an ailing motor vehicle industry when the logical thing to do would have been cut off the gangrenous arm decades ago and look for other ways to compete on the world stage. In effect, we have not lived sustainably, nor have we lived with foresight or imagination, and if we continue in this manner, we will soon have to pay the piper.

But if there’s one thing we can do to bring our country into the 21st century and help our people keep apace with the rest of the world, it’s to roll out a quality, ‘tomorrow-standard’ broadband system at taxpayer expense. Why at taxpayer expense? Because it will benefit the whole country by creating job opportunities for those rolling it out, it will enable businesses of all sizes across the country to communicate with surety and develop their businesses in a more competitive manner (more employment), it will bring better medical assistance to rural and remote areas, and it will help us make our own, individual, sustainable mark on the rest of the world.

If you follow this blog, you will know that in March this year our office was without its broadband connection for 18 days. It nearly crippled us. We had to involve the Telecommunications Ombudsman and our local federal member, Louise Markus, to get the issue properly fixed. Now Louise is a Liberal Party member, and her office did a wonderful job cutting through the red tape for us, spending their time making phone calls and hassling people so that we could get back to work while we waited for our reconnection. But the point is, our local member (whichever party they work for) has more important work to do than make sure that one small business gets the service it pays for!

When I look at the Liberal Party’s national broadband proposal, I want to cry with frustration over the sheer stupidity of it. A nation-changing project like this should not be based on overall cost, but on value for money. Let’s look at it this way:

I need a new pair of boots and I have $55 saved up. I do have a pair of boots which may or may not last another winter or two, but they are on their way out, so I go shopping and find I can buy:

a. a pair of vinyl boots which will last two winters, and protect my feet from general moisture but not rain, for $50. If the soles aren’t thick enough or the heels high enough to keep my feet dry when I step in puddles, I will have to wear them like that or throw them out.

b. a pair of leather boots which will last five years and keep all forms of water out for $75. If the soles aren’t thick enough or the heels high enough to keep my feet dry when I step in puddles, the local cobbler (yes, they do still exist!) can upgrade them for me.

What would you do?

I know what I’d do. I’d wait a couple more weeks and scrape up the extra $20 – it will extend the length of my investment 2.5 times (costing me $15 per year over five years, instead of $25 per year over two years), keep my feet dry and warm for five winters in a row, which in turn means I will be less likely to catch any winter colds or flu, so with better winter health, I will be more productive for the next five winters.

If so, then voting for the Labor Party’s NBN over the Coalition’s NBN should be a no-brainer for you.

The Labor Party’s NBN replaces the old copper wiring before it starts breaking down and fully wears out, is fibre-to-the-home (FTTH), meaning long-lasting, easily upgraded, optic fibre all the way to your house or business. It will last much longer, be more reliable, quieter and sustainable than all existing broadband options. It is currently estimated to cost around $37.4 billion and be completed in 2021, with a download speed of 100Mbps download. (For those outside FTTH range, a satellite alternative will be provided.)

The Coalition’s NBN using the exiting copper wiring which will need replacing sooner rather than later, is fibre-to-the-node (FTTN), which means it only goes as far as those noisy green boxes you see dotted around the streets. To get it to your house or business, you will have to pay from the node onwards, and the signal will deteriorate the further away from the node you are as it has to pass along the existing copper wires. It is currently estimated to cost around $20.4 billion and be completed in 2019, with a download speed of 25Mbps download.

So how will you be making your decision this time around? Based on what we have now and a small step for Aussie-kind? Or will you be looking to the future and voting for a big leap?

Me? I’ll be voting for the big leap. Even if I didn’t use the internet myself, I can see that the investment in a world-class broadband system for this country is probably the one most imaginative, sustainable and clever idea anyone has had for us as a nation for a long time.

With thanks to:
http://www.gizmodo.com.au/2013/08/fast-facts-the-difference-between-the-labor-and-coalition-nbn-plans/
for the above NBN facts and figures.