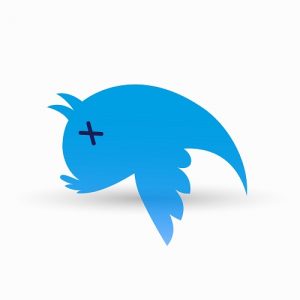 I did it. Last month, after deliberating for weeks, I broke up with Twitter. Why? Social media overload. Yeah, I know, first world problems.

But seriously, the difference in my mental health this last month has been phenomenal. And I wasn’t a Twitterati, just an occasional user. For nearly three years I tried hard, really hard to get the hang of it, tried to get engaged, but it just wasn’t working for me. I even bought a book on it: Rayne Hall’s Twitter for Writers, and while I felt enthused reading Rayne’s great book, I just couldn’t keep that enthusiasm up when I closed the cover.

The reason it took so long to quit was because I thought everyone was on Twitter, or soon would be. I felt that, as a businesswoman, I needed to be there for my profile, my clients, my brands. Plus FOMO. Fear of missing out. Good old FOMO!

And then I read an article in the Sydney Morning Herald’s Good Weekend which revealed that Twitter had 316 million active monthly users in 2015. Not bad, by itself. But when the article also mentioned that Facebook had 1.49 billion active monthly users, I thought, ‘Why am I bothering?’ (Read more: http://www.smh.com.au/good-weekend/its-hip-to-be-square-what-twitter-ceo-jack-dorsey-did-next-20160307-gnd5sd.html#ixzz46UjVEigT)

I had Facebook, understood it (for the most part), was using it happily (as opposed to Twitter which I was using because I felt I should), and when one of our authors, Montana Ash, showed me that you could drive sales using Facebook alone, I began to wonder why I was stressing myself out so much, because I also had LinkedIn, Pinterest and Instagram, and several Google+ profiles to maintain …

So I started to listen to my gut.

Too many social media profiles

At one point I had three Twitter profiles: one for myself, one for narratorINTERNATIONAL and one for One Thousand Words Plus. That meant using an app so that I could post across several social media profiles all at once, depending on what was being posted. I had used HootSuite for several years but it was never 100% reliable in all areas. It improved as the years went by, but I was never totally confident that it was going to do what I wanted it to do when and where I wanted it to do it. Like having a well-behaved five year old with a mischievous streak – they want to be good, and you know for the most part they’re dependable, but you also know that they’re going to give in to temptation every once in a while. Usually on the one occasion when you really, really need them to behave.

When we wound up narratorINTERNATIONAL, that left me with two profiles: One Thousand Words Plus and mine, so life became easier. I canned HootSuite and moved to TweetDeck, figuring I’d log in and post to Facebook separately. That helped a little bit, except that I had to remember to keep using TweetDeck. The truth is, I had to keep remembering to use Twitter. And I’d long since given up posting to LinkedIn, Pinterest, Instagram and Google+.

And when I did use Twitter, I had to keep everything to 140 characters or use indicators to let people know that my ramblings continued in the next tweet. Seriously, how can someone like me paraphrase their thoughts into 140 characters? Have you read my blog?

I also felt like a loser when it came to the hashtag department. I’ve seen so many creative, relevant or witty hashtags, but I’m no hashtagger. I tried, and sometimes I think I nearly nailed it, but I felt like the class nerd trying to join in with the joke-fest.

Have you checked the phone lately?

Yes, ‘ding’ is a technical term

So I cancelled my Twitter profile a month ago, and now whenever the phone dings, I know it’s likely to be someone or something relevant, something that I’m going to want to know about. The time saved not checking it, just in case it’s important, is one thing, but the quiet, the lack of self-inflicted pressure to constantly check the screen, is so liberating! Yes, I know, I could choose to ignore all the dings, but what if one of them was something important? Because that was the other problem – I couldn’t work out how to change the tone of the Twitter ding so that it wasn’t the same as my SMS ding. And yes, in this situation ‘ding’ is a perfectly acceptable technical term. Don’t mock me.

For now, I’m just using Facebook. Once or twice a day. Sometimes less, sometimes more. But I’m using it because I want to, because it works for me. There are Twitter users out there having a great time. They’re interacting with people and having fun and exchanging ideas and who knows what else? But I just can’t be one of them. The sense of urgency, the feeling that if I wasn’t alert to it every waking hour that I’d miss out on something, that I’d be late to the party, really began to irritate me. A lot of that’s my fault. Your own perceptions of something affect how you interact, and my perception was that I needed to be alert and aware the whole time, just in case, otherwise I wouldn’t be ‘Twitter-relevant’.

But I finally accepted that I don’t need to be Twitter-relevant.

I feel calmer. More in control. But you know the really good thing? #nomorehashtagpressure

4 Replies to “Why I broke up with Twitter: fighting social media overload”