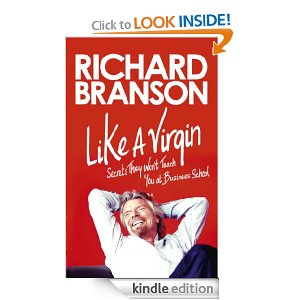 I was thrilled recently to read the intro to Richard Branson’s new book, Like a Virgin, where he states:

The simple fact is that formal education and I were never really meant for each other. I suffered from an acute combination of dyslexia and what I suppose would nowadays be diagnosed as attention deficit disorder.

I had long held the view that Sir Richard would probably have been an ADD or ADHD ‘sufferer’ (don’t you just love that term – ‘sufferer’?) and have always felt that he’s a great example of the fact that an ADD/ADHD diagnosis does not have to mean the end of the world.

If you look around you at the people you know, in all walks of life, with all their different levels of ‘success’ you will probably be able to identify many ‘fully grown’ adults leading very successful lives who fit the ADD/ADHD category – people who can’t sit still, people with enormous energy and drive, people who are ‘all over the shop’ when you’re talking with them. And how are these people different to people in jail and living on the fringes of life who also have ADD /ADHD? For the most part, and barring other issues such as physical brain trauma, chemical imbalances in the brain etc, the successful ones will have been exposed to the same discipline in their early lives as their non-ADD/ADHD siblings and friends. In other words, their parents didn’t give up on them because they were ADD/ADHD, and in fact, they probably didn’t even know that their children ‘had a problem’. Because in reality, they didn’t. It’s modern society which has caused the problem.

How many times have you had a parent excuse their child’s terrible behaviour because ‘Oh, he’s ADD’? How many times have you seen a child’s ADD/ADHD diagnosis used as an excuse for not bothering to teach the child right from wrong? ‘Johnny, get down, you shouldn’t climb on there. Oh I don’t know, he just doesn’t listen to me.’ Gee, I wonder why? Could it be he’s learnt very quickly that there will be no consequences if he ignores you?

Now you don’t have to beat the crap out of your children if they disobey you – I’m not advocating that for a minute – but every child, ADD or not, needs to learn that there are consequences to certain actions. Put your hand on the hotplate, it gets burnt. Drop a glass, it breaks. Punch your little sister, she screams, and Mum comes down on you like a tonne of bricks!

So what do you need to do differently with an ADD/ADHD child?

1. Accept that there is nothing actually wrong with your child.
The ADD/ADHD child is a normal person, just like all the other normal people around them. They just have higher levels of energy which need to be directed. Many years ago these people were simply known as ‘hyperactive’. It was no excuse for bad behaviour, they were just people that had more energy. Today they’re called ‘sufferers’ – it’s bullshit. They aren’t suffering anything except a label which modern society has created and which only serves to alienate these people from the possibility of a ‘normal’ life.

2. Give them attention.
So many of the ADD/ADHD children I’ve seen are just starved of attention. Not all, but many. I realise these children must sap an awful lot of energy from their parents, but those parents that accept that their children have high levels of energy treat them accordingly. They take them to the park and kick a ball around with them. They enrol them in activities which stimulate other parts of their personalities so that they develop a well-rounded interest in lots of things. They teach their child that sometimes they have to have ‘quiet time’, such as in the last half hour before bedtime, and they take that time to read quietly to their child, or talk about their day, or whatever’s troubling them, or something they’re looking forward to.


3. Remember that, like all children, your child needs to have boundaries set and adhered to.
They need to understand that certain forms of behaviour are unacceptable, not just to you, but to society in general. You are not doing your child any favours if you let them behave badly. Teach them the basic eye for an eye as in ‘you wouldn’t like it if someone poked you in the eye, so that’s why you shouldn’t poke them in the eye’.You need to explain that it’s not okay to damage their friends’ toys/games/property etc. They wouldn’t like it if that person damaged their things. Show them that if they’re nice to people and behave decently, people will be nice back to them. If they’re horrible to people, then they won’t have friends, and people will be horrible back to them. You would do this for your child if they weren’t diagnosed with ADD/ADHD, so why shouldn’t your ADD/ADHD child have the benefit of the same education?


4. Take notice of positive things that your child shows interest in such as drawing, running, mechanical things etc.
Encourage them to develop hobbies that they’re good at and which they enjoy – this will help build their confidence and self esteem, and give them somewhere positive to focus their energy. Get them into team sports if you can – if they can learn to play as part of a team, this will be good for their development. Many of today’s leaders are driven hyperactives!


5. Enrol them in a martial art or golf.
Both these activities require energy, but they also work with the mind teaching focus and self discipline.


6. Keep your child’s sugar, artificial food colouring and preservative intake to a minimum.
Until you’ve seen the effect these things can have on a child, you wouldn’t believe it. I can remember the first time my two year old had red food colouring in a drink. She’d always been one of those very easy babies, a quiet child who was happy sitting in the corner doing her own thing. Never needed attention, and didn’t really even move around that much. One 250ml red tinted juice and she was like the Energiser Bunny for two hours straight! While it was funny to watch, it horrified me to think of all the innocent little children out there being fed this stuff on a daily basis, wired to the nines, driving everyone around them crazy, getting yelled at simply because they were overwrought from food additives – and that’s where bad patterns of behaviour start. So do your child a favour – you don’t have be a food Nazi, just don’t buy the cordials, the colas, the fizzy stuffs etc unless it’s a really special occasion. Same for the chocolates and the lollies and the pre-made cakes from the supermarket shelves. Feed them stuff that’s actually going to fill their bellies and satisfy them – not wire them up for hours.


7. Always have a routine.
You don’t have to be a slave to it, but if the same things happen on the same day and at the same time most of the week, then the child will know where he stands and what’s expected of him at those times. Have a bedtime routine that they’re quietly expected to follow – it doesn’t have to be a fight, you just explain that this is what has to be done before bed, and you’ll remind him at that time that it’s his job to do those things.


8. Don’t go around telling everyone your child is ADD/ADHD.
Most people will probably guess anyway, but if you label him with it, then he’s going to feel different and ‘not normal’ and none of us would really want our children to feel ‘not normal’ would we? You have a big nose, or a small nose, you have a good sense of humour, or no sense of humour, you have more energy than someone else, or less energy than someone else. What matters is: are you a good person? Do you do the right things in life or are you continually naughty? Nobody likes a naughty child, so before long you’ll have no friends if you decide to always be naughty. It’s your child’s choice to be nice or naughty, but your job to support him with being nice.


9. Celebrate his wins.
If he gets an award – tell him how proud you are. As you would with any child, reinforce good behaviour, try not to get too distracted by bad behaviour.


10. Keep an eye out for ‘complications’ such as dyslexia.
The two often go hand in hand, possibly because the ADD/ADHD child is harder to keep seated to learn to read! If you read to your child from the youngest age possible, whether an ADD/ADHD child or not, and teach them the alphabet song (the one Sesame Street characters sing to Twinkle Twinkle Little Star) they’ll be familiar with the idea of books and the alphabet without even realising they’re being taught. Get them singing that song, and bit by bit introduce them to the letters of the alphabet. If they’re struggling with the letters, then draw with them. Show them how to draw a square, then add a triangle on top to make it a house. Get them to copy what you’re drawing on their own sheet of paper. Add more squares for windows and doors. Add a rainbow and the sun. Keep the lines simple. Draw the same picture over several days, maybe vary things here and there slightly, and colour your pictures together. This teaches them to observe the lines, the direction, the shapes etc, and will help prepare them to identify letters. Then, if your child truly is dyslexic, the signs will be more obvious.


11. If there are other issues such as your child being on the autism spectrum, then a lot of the above will still apply, but may need to be toned down a little.
However, all children need a routine – it allows them to know what’s going to happen next, and if there’s anything not quite right at any stage, such as they’re off colour, it will be easier to pick up and deal with, than if you all just do whatever, whenever.


Your ADD/ADHD child will be hard work – but all children are. And if your child isn’t hard work at all, then you’re either not caring enough about their development – or they have no personality!

Opinionated blogging. It’s at the top of the page 🙂