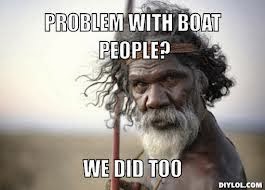 I have a young Aboriginal friend who recently experienced difficulty hailing a taxi. Admittedly it was night time, but he managed to ask the fourth driver refusing to take him what the problem was. The answer? ‘You’re black.’

While I was astounded that in this day and age one could still experience so much difficulty getting a taxi simply due to their skin colour, what astounded me even more was that my friend was able to get a cabbie to actually admit to it!

The cabbie didn’t say ‘You’re pissed’ or ‘You look like you’re going to rip me off’, he said ‘You’re black’. End of story.

Which left me thinking: How the hell can we ever get ‘reconciled’ when those attitudes continue to exist? It left me examining my own attitudes and experiences about things and to see what options we might have. And I can come up with only one: We need to redefine what it means to be ‘Australian‘.

Following on from my young friend’s taxi-hailing experiences, I asked a couple of other young people I know, one aged 18, the other 22, what they were taught about our Indigenous people and their culture as part of their secondary schooling. Their answers appalled me. It would appear that Indigenous history starts pretty much with the arrival of The First Fleet and its effect on our Aboriginal people, and that it is not mandatory to teach our young people Indigenous cultural activities such as Dreamtime storytelling, dot painting, food gathering etc.

What is an Australian?

If I go on a coach tour of Europe, I will be taken to restaurants where I will see Spanish flamenco dancing, or Swiss horn blowing, or Germans dancing in lederhosen. These are culturally historic activities for the countries I am visiting. If I take a coach tour of Australia, what do I see? I may be taken to a corroboree, or a bush tucker feast, but if I’m being told that these activities are Australian culture, then what about the other things I get shown, such as surfing, barbecuing, backyard cricket, Aussie Rules Football matches and RSL clubs? Aren’t they Australian culture, too?

The ‘mind-virus of radical non-discrimination’

Coincidentally, in an article in the Sydney Morning Herald on 14 October 2013 (yesterday), Paul Sheehan quotes from an email he received from a man called Malcolm Pollack, who was discussing the sense of unease about the pressures on the American middle class. One of the things Mr Pollack discusses as part of his explanation of the ‘mind-virus of radical non-discrimination’ is:

Socialism, at least in the milder Scandinavian forms, can work well enough but only if there is the social cohesion that naturally arises in a people who are joined together by history, folklore, language, music, literature, ritual and the natural kinship that arises from a broad commonality of ancestry. There are, indeed, sound evolutionary reasons for this. Absent that, though, there will be trouble.

Educating the black out

From where I sit, as a white Australian, it seems to me that it’s our Indigenous folk that are having to do all the reconciling. They have to go to our schools, and learn the things we teach them. If they’re really good, then when they do their HSC, our universities will throw ATAR bonus points and all sorts of scholarships at them, which is an insult as it suggests that they must be too stupid to get into university under their own steam. And then there’s the other side of this Machiavellian bonus points system: it helps the universities meet their government quotas for Indigenous enrolment!

So we patronise them with our white people’s policies and give them white people’s brownie points to encourage them to go to white people’s universities where they can learn all sorts of things to help them make it in the white man’s world.

Yep, that’s what reconciliation seems to be to me – we can’t breed the black out anymore, that’s not nice, so we’ll just educate the black out instead.

Winding the clock back

We need to wind the clock back 250 years and start thinking differently. We can’t be unbuilding our buildings and roads etc, but we can start rebuilding our culture, with an education that allows all children in Australian schools to learn a definition of ‘Australian’ that helps us reconcile with our Indigenous people, rather than the other way around.

In Year 6, when I was 12, we had a wonderful teacher, Miss Annette Stilsby, who taught us all sorts of things about Aboriginal culture. She brought in coolamons, rhythm sticks, woomeras, told us Dreamtime stories, and talked about how to hunt for bush tucker. As a youngster, this, to me, was what it meant to be Australian. While I considered myself Australian, because I was born here, I knew that my parents hadn’t done these things growing up, (they were English). However, I never for a moment considered that these weren’t ‘normal Australian’ activities – they were, to me, just ‘true Australian’ activities. We had a Namitjira print on our lounge room wall, and I was a first-generation Australian descended from migrants – simple. The Aboriginal kids up the street were simply that – the Aboriginal kids up the street. We all went to the same school and there were no issues. I was Australian, they were simply more Australian.

I realise now how my unique experiences as a 12 year old have made it hard for me to understand where the problems are – because I just didn’t see them. They really didn’t exist for me and my friends because of the way we were taught.

So that’s my theory – mandatory teaching of Aboriginal culture in all primary schools as a starting point. A redefining that ‘Australian’ culture starts with Aboriginal culture at its base, and the other stuff, the stuff that the white man brought, simply sits on top of it.

Now, before you start the argument that dot painting, corroborees, etc belong to – and should belong only to – the Aborigines, consider this: If you watch international football – rugby league or union – every New Zealand team performs a haka – even the white players. The Maoris have shared their culture with their European invaders. They still own their culture – I can’t imagine many groups of all-white guys doing a haka around the barbie on a Sunday afternoon – but this Maori dance has become a symbol of New Zealand, the country, as opposed to a symbol of New Zealand’s Indigenous people.

If we truly want reconciliation, then we need to take a step back and start incorporating Indigenous culture into all Australian lives, and right from the very start, rather than expecting our Indigenous people to retain their own culture, but live alongside us in our white world.

And if a white person makes his name as a dot painter, so what? So long as the buying public understand that he is a European dot painter, not a traditional one, then where’s the harm? If it helps promote Australian Aboriginal culture and makes it more widely known, acceptable and understandable, then where’s the problem? If the alternative is that fewer and fewer people know how to do it and it eventually dies out … well, take your pick. And besides, if Albert Namatjira was ‘allowed’ to paint conventional European-style water colours, wouldn’t it be a way of reversing the ‘whitening’ of our Aboriginal people, by ‘blackening’ our non-Indigenous?

Start with the young minds

In short, my recommendation would be mandatory Indigenous education in primary schools across the country in all ways of life relevant to the Aboriginal people in general, and more specifically the Aboriginal people of the school’s local area (e.g. in our area, the Darug and Gundungurra peoples). Teach all our school children that ‘this is what it means to be truly Australian’.

And who knows? One day we might have a fast food restaurant chain rivalling McDonald’s by serving emu egg omelettes and roo burgers! Wouldn’t that be a brilliant reconciliation of the traditional with the modern?

It won’t happen. Feel free to tell me I’m dreamin’. Because even if it did happen, it would take two generations to really kick in. And many, many people with a helluva lot more vision than me to get the ball rolling.

But what if? What if black did become the new white? If it did, then maybe the whole idea of saying ‘sorry’ and calling for reconciliation was really meaningful after all.

2 Replies to “Reconciliation: Not until black is the new white”