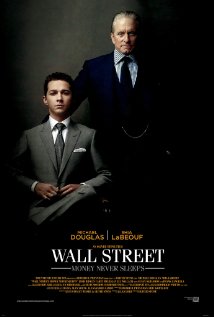 I don’t normally review books or movies I don’t enjoy. I would much rather review items that I think are worth spreading the word about, but as this movie has been out for a while and I probably can’t hurt it, I figured it would be worth letting you know … drink a strong cup of caffeinated coffee first!!


I remember really enjoying the original Wall Street back in the 1980s, hence the decision to hire the follow up the other evening. What a let down.


As an editor, it worries me that I can’t work out how this movie could be made better. As an editor, we’re trained to think about plot and characters and dialogue, and what we learn for storytelling should be translatable to movies within a reasonable extent, as they are just stories told through a different medium. But I can’t for the life of me work out what needed to be done here.


I think, perhaps, it needed more vitality. We watch movies to see realistic characters who are still that little bit larger than life, but the only one who came remotely close to that was Susan Sarandon – initially almost unrecognisable, she proceeded to chew up the scenery every time she entered a room. Michael Douglas gave it a bit of a shot, particularly when giving his guest lecture on his book promo tour to a university hall full of interested young things, but this was perhaps his best scene.


Ultimately, this movie had characters which were hard to attach to and care about, and a plot line that, like so many Hollywood sequels these days, was just an excuse to cash in on something which had, in the past, been successful.