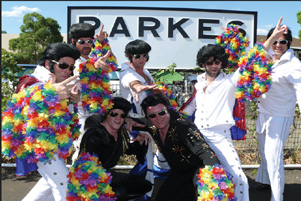 Again the news this evening is talking about Sydney’s (still non-existent) second airport.

I can remember talking about the Badgerys Creek proposal with a fellow employee at QBE back in the 1980s – he lived on acreage at Kemps Creek and was quite happy either way – if the airport went ahead, his land was worth a small fortune. If it didn’t proceed, he got to keep his idyllic acreage.

Fast forward 25 years and still the discussion is rotating around old ground. And still Sydney has no second airport. It seems that no state government wants to be the one to cop the flak of tough love, and so it’s easier to do nothing, than something.


The one remotely viable option being offered up as an alternative to Badgerys Creek has been Wilton, south west of Sydney. Frankly, I think that’s even worse. It’s on the fringe of suburbia and borders bush reserves and catchment areas for several dams. Having planes flying in over this area, not to mention the construction works involved to develop an airport in this area, can only damage it. Wilton is adjacent to a slice of green belt running south from Sydney to the Southern Highlands and for the health of the city’s future generations, should be left as is, as much as possible.

So where does that leave us? Well, in the voice of Alice from the Vicar of Dibley, have we thought about pine? Or, better still, Parkes? Yes, Parkes. Home of The Elvis Festival and a location just perfect for Sydney’s second airport.

For many years now, there has been talk of making Parkes the freight and transport hub for New South Wales.  In fact, so much talk that there’s even a website, http://www.parkeshub.com.au, dedicated to extolling the virtues of Parkes as a transport hub for the nation.

I can hear you now – ‘Parkes?! You’ve gotta be kidding!’ But think about it.

On Friday 6 August 2010, The Hon Anthony Albanese MP, Minister for Infrastructure, Transport, Regional Development and Local Government announced that the Federal Labour Government would build the Melbourne-Brisbane Inland Railway and pledged $300m to commence the pre-construction work in 2014.

So the Inland Railway is going to be built – and Parkes is right slap bang in the middle of it! It already has its own airport and while a fully-functioning international passenger-cargo airport would probably require quite a bit more space and infrastructure than the current airport, at least as an upgrade it would be less distressing to the residents around it than plonking a brand new airport in the middle of an area never really destined to have one. And according to the Parkes Hub website, Sydney is only 50 minutes by air from Parkes – not far at all!

If cargo is destined for the NSW eastern seaboard, bring it to Sydney. If it’s destined for any other state, or west of the Great Dividing Range in New South Wales, send it to Parkes instead. Cargo planes diverted to Parkes, instead of Sydney, would be easier to unload and the containers shipped via high speed rail across the country from Parkes, rather than placing more strain on the Sydney metropolitan infrastructure.
The same goes for passenger flights. Rather than have people landing at Sydney to connect with flights to Melbourne, Adelaide, Canberra or Brisbane, take them to Parkes and have them connect there, instead. Not only will there be less international flights landing at Sydney, there will be less domestic flights taking off from there.

Ever since I was a little girl at school, successive state governments have toyed with and nattered about ‘regionalisation’ and ‘decentralisation’ – the concept of getting people out of the Sydney basin and into more rural areas. Now is a great opportunity to stop talking, and start doing.


Building a full-scale international/domestic passenger and cargo airport at Parkes would bring enormous wealth to the region – including places such as Forbes, Peak Hill, Dubbo and the western tablelands of New South Wales.

Decentralisation would work not only for airline and airport employees, but for a whole host of supporting industries – catering, accommodation, passenger transport, etc. Employees in these industries would require housing, medical, clothing and grocery needs to be satisfied, and then their families would require education, clothing, etc. Parkes and surrounding areas would grow, and yes, in 20 years time the new Parkes would be unreconcilable with the old Parkes and many would be sad about that, but it would create a thriving community offering all sorts of opportunities to those willing to look outside the box.

And that’s what we need to solve this ‘Sydney second airport’ problem – for a government that’s prepared to look outside the box. Parkes may not be the answer – and the people of Parkes may not like this idea, either – but someone, somewhere has to start thinking creatively. Otherwise, we’re all going to get stuck in one very uncomfortable, inappropriate box of a solution.