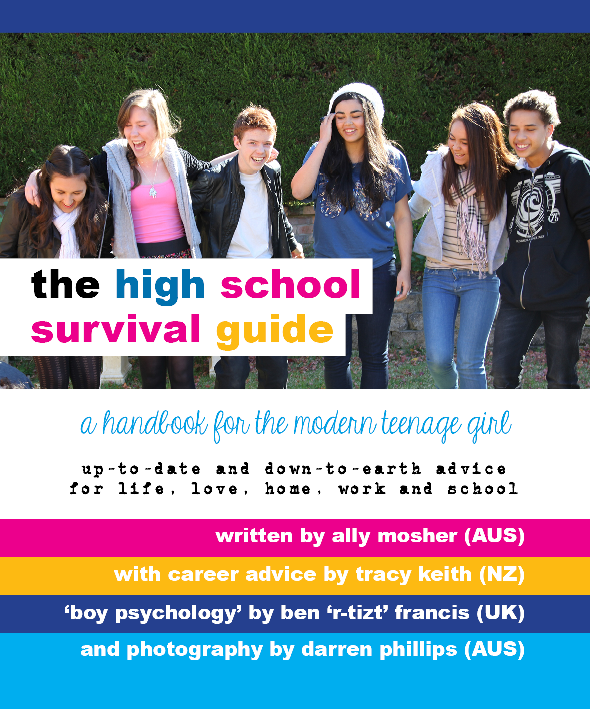 My younger daughter works with me. Technically, she works for me, but we get on so well at the office that I think in terms of her working with me.

She spent her gap year working with me, and by the time her gap year was finished, she’d worked out that the last thing she wanted to do was go to uni full-time. Instead, she kept working for me, signing up for various online courses in graphic design, web development etc, and wrote a book. That’s right: at the age of 20, she became a published author. And not just any book – it’s a full-colour, magazine-style guide to help teenage girls through those difficult years.

We knew she was writing it, and had a photographer friend (Darren Phillips of Darphi Images) doing the photos (in some of the worst weather imaginable), and had managed to get contributions from a UK ‘triple threat’ performer (Ben ‘R-Tizt’ Francis from Luminites) and a careers advisor from New Zealand (Tracy Keith of TMK Consulting), and we helped a little bit here and there as taxi drivers, but for the most part we kept out of it as it was her project.

We expected it to be reasonably good – we had seen the effort she’d been putting into it over two years – but we had no idea how good the book would be, until she showed it to us laid out, formatted, and almost ready to print. And that’s when I said, ‘Please don’t take this to a traditional publisher – please let’s do it ourselves.’ I still don’t quite know why. Perhaps I was worried that they might insist on certain changes to the book, taking it away from what she believed would be best. Or that they would push her into doing appearances and things that she wasn’t ready for. Or that they would make more money out of it than she did. Perhaps that was it. I knew she would get 10% of the RRP of every book sold, but what if they were making 20% of the RRP after production and promotion? That just wouldn’t be fair.

So we funded the printing, and put it out under our own MoshPit Publishing label, which was a good exercise for us anyway as we’d not published a colour book before.

Now, you would think it would be easy to sell a book called The High School Survival Guide – a handbook for the modern teenage girl, wouldn’t you? Apparently, not so!

First off, you have to help your author not be embarrassed about having written such a full book at such a young age. My daughter is a reasonably humble kid, and once the book came out, she suddenly wanted to hide. Turns out it is much easier to say ‘I’m writing a book’ than it is to go around saying ‘I have written a book’. Once you’ve written and published your first book, you feel like just a teensy bit of a wanker! It gets easier with the second book as by then you start to feel that actually are an author, rather than an imposter. But there’s a bit of mind shift with that first book.

Once you get your author to believe in their book, and themselves, the next thing you have to do is raise awareness of the book so that people will buy it. That’s all well and good: we have the internet, we have a shop front, we have our online shop, and we’ve been able to stock it in a pharmacy and a book store in the local area from time to time. We’ve done mail outs to high school librarians and school counsellors. Ally has presented in front of 30 high school liaison officers. She has written articles for magazines and sent copious copies, in both print and ebook formats, to many magazines and parenting sites. As a mother-daughter/publisher-author team we’ve presented a double act in front of 170 junior high school girls (now that was an interesting hour!). The book is available on Amazon, and from our own online shop, and it has its own website and Facebook page.

But you know what? That’s just not enough. We’ve managed to sell some bulk orders to some high schools for their libraries, but generally speaking, it’s one book at a time.

Now, I know part of the reason is that it’s not cheap. At $34.95 it’s not the sort of spur-of-the-moment book you grab as you’re trawling the internet. But it’s also not the sort of book you ignore. With young girls falling victim to the most horrendous side effects of low self esteem and poor parenting these days, you would think that so many adults would see it and think ‘I must invest in that for my daughter/granddaughter/niece etc’. But no.

So we’ve developed ebook versions (at $4.99) and a free sample which means that potential buyers can decide if they want to invest in the print copy or not. And still it’s not enough. And do you know why?

Because there are millions of books out there. Millions. And while there are millions of potential buyers, they need to come into contact with your book. They need to see it probably more than once before they commit to buying it. It has to be a book that they’re going to be interested in. And it has to be there, ready and available for them to buy it, at that moment that they decide that this the book that they’re going to buy next.

The best advice I can give you is:

1. Be sure that you’ve written a good book. See if you can get some sort of feedback from people you don’t know – people who are more likely going to be honest with you. If perhaps the feedback you’re getting suggests that your book isn’t as good as you thought it was, then consider pulling it off the ‘shelves’, polishing it up, and then re-releasing it. If the feedback suggests that it has too many errors, then at least get it proofread prior to re-release. Of course, if you’ve gone ahead and had 2,000 copies printed and they’re taking up parking space in your garage, this isn’t so much of an option for you.

2. Get reviews! Wherever it is up for sale on the internet, ask people you know who have read it to log on and review it. However, make sure you ask them for honest reviews. The worst reviews are glowing five-star reviews from people who are clearly your friends and relatives. One of the most honest five-star reviews I have read was for J-L Heylen’s book Wisdom Beyond Her Years. A buyer called KB admitted that they were a bit sceptical, but found it worth the read, despite saying that the book was a little too ‘‘explainy’ for my personal taste, I think we can put that down to this novel being the author’s first‘ and ‘Wisdom Beyond her Years is not high literature, but it is a whole lot of fun‘.

3. Don’t be afraid to change the cover of a print on demand or ebook version. Ally recently changed her cover to the one above from the plainer, less emotional one below, and sold a print version on Amazon almost straight away:

4. Make sure that you or the book have some sort of website. It’s all well and good having a social media presence, but you also need to be able to reach those people outside of social media – not everybody has a Facebook or Twitter account!

5. Set up author pages and profiles. If you have published through outlets such as CreateSpace, KDP or Smashwords, then take advantage of free marketing opportunities such as the Amazon Author profile page (see mine here: http://www.amazon.com/Jennifer-Mosher/e/B00BO1OCTY/ for an example) and the Smashwords author profile page.

6. Think laterally. Ally recently wrote 10 Tips for Surviving Teenage Daughters for SchoolMum.net and organised the free sample as a result of a request from Family Deal Friday. This is not sales, it is marketing. And if all the dominoes are lined up correctly, marketing leads to sales.

7. Find magazines and blogs which need content and send them details of your book. Family Australia Magazine were happy to include The High School Survival Guide on page 6 of their Autumn issue as one of their ‘What We Love‘ items. A good source for Australian writers is SourceBottle (all puns intended!)

8. Keep writing. Write another book, get it out, then use your books to cross promote the other. Ally is now developing plans for a text-only book (rather than an illustrated one) aimed at parents and guardians to complement the girls’ book.

9. If you believe in it, don’t give up. Keep your eyes and ears open for opportunity and keep plugging it. If it’s an ebook or a print on demand book, then time is on your side.
10. Spread your message as far and wide as you can. You can’t expect family and friends to do all your sales work for you!
11. Enter appropriate awards. Ally entered her book in the 2012 Global Ebook Awards AND won the best book in the non-fiction teenage literature category!
12. List it on directories and other appropriate places, such as One Thousand Words Plus (OTW+). If you’d like a coupon for a free life-time listing on OTW+, please contact me.
13. Don’t bore people stupid with your ‘I’ve written a book, would you like to buy a copy?‘ message. Yes, you need to publicise your book, but you also need to learn when to stop talking about it!
These are not the only things you can do – there are others, and if you’d like to share what’s worked for you and what hasn’t, feel free to leave a comment below.