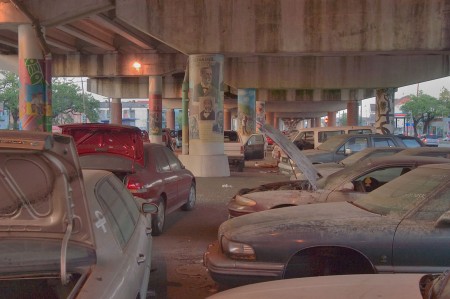 Seems that the news this week is full of Liberal party promises – state and federal – to build us new roads, provide the M4 East missing link http://www.smh.com.au/opinion/political-news/abbott-promises-m4-east-20120629-2180u.html, create a train route through north west Sydney which will be totally incompatible with everything else that currently exists in the state of New South Wales http://smh.drive.com.au/roads-and-traffic/tunnel-too-small-could-make-rail-link-a-bridge-too-far-20120703-21fjy.html, build another harbour crossing http://www.smh.com.au/nsw/harbour-crossing-back-on-track-20120601-1zn5c.html  … and I’m beginning to wonder: why the hell aren’t our governments pouring all this money into a more sustainable future?

While there are many different views as to when the oil reserves will effectively run out, it will make little difference in the long run if we don’t start preparing now. And by preparing, I don’t mean spending more of our country’s wealth on more roads to accommodate more cars which, within probably 30 years, will suddenly be something few of us can afford.

The oil reserves start to dry up bit by bit. The oil companies will know it’s coming, so they’ll slowly start upping the price. Ordinary folk won’t be able to afford fuel so bit by it they’ll stop driving their cars, dropping back to one per couple etc. Then as supplies tighten further, there’ll be government rationing as prices climb (remember the good old strike days of the 1970s when you filled up on the day of the week depending on whether your number plate ended in an odd or an even number?), eventually leading to government-sanctioned purchasing only.

So cars will be driven until they stop – left and abandoned as worthless monuments by the side of the road. The Western capitalist economy will screech to a shuddering halt – without oil we can’t travel to our jobs, and we can’t transport all those wonderful goodies across the world for us all to purchase, so we will lose our jobs because we either can’t get to them, or our employers can’t afford us because they can’t maintain their sales because they can’t transport their goods anywhere near as effectively as they used to – so we will get thrown out of our rental properties, or have the banks foreclose on our mortgages … and there’ll be a whole sub-class of people living in the abandoned cars by the side of the road and streets full of empty houses which banks can’t sell because no one can afford to by them … cue sci-fi movie ‘The Car Dwellers’.

And in 500 or 1,000 years time, archaeologists and historians will be speculating on what went wrong in our society and why we couldn’t see it all coming, and they’ll be writing massive tomes about ‘The Rise and Fall of the Western Empire’ … and I wonder if they will have any idea about how quickly our wonderful little house of cards came crashing down.

We have a wonderful lifestyle now, but it can’t last. The only thing we can do is be realistic about the future and start preparing NOW. Because it will be here before we know it. It will be here before the preschool kids of today get a chance to teach their own kids to drive.

Developing a solar powered car with a wind turbine array behind the front grill would be a brilliant place to start. Then we might actually get some value out of all these roads our governments keep building! But will it be enough? Or even feasible in the long term?

Who knows, but without government leadership which allocates as much thought and planning to a realistic future as it does to an unlikely one, I dare say those ‘Rise and Fall of the Western Empire’ theses will be churned out in abundance down the track.