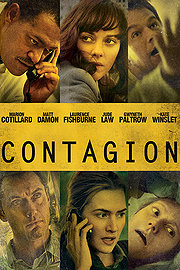 We don’t often have the fortune of hiring a movie that our whole household agrees on, but last Saturday we managed a 100% score out of three of us, and if the fourth had been home (instead of gallivanting around the countryside, bless her), I’m sure it would still have been a 100% score.


I’ve never made a movie, but the thought of it is daunting. It’s very easy to sit in a cinema and go ‘What a load of crap!’ but to have an idea, script it, bring it to life with sets and acting and actors … and all the other things that go into making a movie (like costumes, lighting, sound effects – have I forgotten anybody?!), must be really challenging. Will it be boring? Will it make sense? Will it be simply ridiculous?


Hiring Contagion brought all these thoughts to mind. How do you make a believable movie about a virus which mutates faster than something from a CIA lab, spreads further and faster than any disease we’ve yet encountered, without it being maudlin, silly, melodramatic or just plain dull?


Well, I suppose the first step is to hire quality actors.


Gwynnie (Paltrow) is so utterly dependable – the girl who could play such convincing characters in Sliding Doors and Babel then turn on the sass and comedy in Glee brings us a woman who manages to die in the first 15 minutes of the movie. Brave move, Director Soderbergh, but well handled.


And then there’s the ever-gorgeous Matt Damon, looking a little more ‘husbandly’ than Jason Bourne, but again, reliable and believable. Throw in a beautifully understated Kate Winslet with a conversely overstated Jude Law, add a pinch of Laurence Fishburne and a dash of Elliott Gould and your base cast will bring you dignity and diversity.


Support this with a veerrrrrry wide range of unknown-to-me support and other lead actors, and there’s your character soup.


Then, take a simple, but terrifyingly plausible, plot: a virus, originating in a casino in Hong Kong, which begins to wipe out large tracts of people due to its 24 hour incubation period. Flu? What flu? Bang! You’re dead 🙁


The beauty of this movie is that it doesn’t dwell so much on the melodrama, but on the overall effects – the food shortages, the panic, the effect on daily life, the economy etc, that such an attack on the world’s populations would bring.


It’s sci-fi in a sense, but truly not very far from what could happen in reality. And that’s the scariest movie of all: the one that could really happen.


Grab it, watch it, and learn. And more importantly, watch the quick special feature (if it’s included on the disc) about how a little virus could bring the earth’s inhabitants to their knees. Entertaining, but again … oh … so … scary …