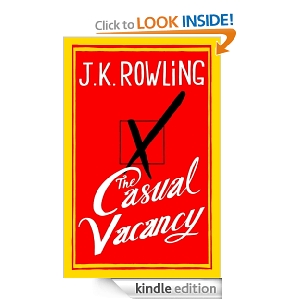 Well, it’s out – The Casual Vacancy – JK Rowling’s first book for adults. As if you didn’t already know!
I saw the hardback in Target last week for $20, or maybe $25, which is a pretty good price for a hardback, especially a new release. But I don’t need any more books on my shelf, so figured I would go home and buy the ebook.
Well, the thing is, the ebook is $20+ as well, so it doesn’t really matter which book I buy, it’s going to cost me pretty much the same. And you know what? Here’s the logic I am applying to tell me that it’s okay to spend that sort of money on an ebook:
So yes, let’s all drop $20+ on the eversion so that we can subsidise the print version of what is, essentially, a gamble by Rowling’s new publishers. That seems a respectful way to treat your potential audience to me.
Opinionated blogging. It’s at the top of the page.